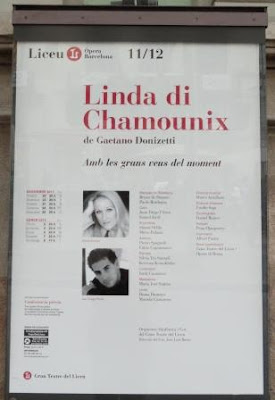 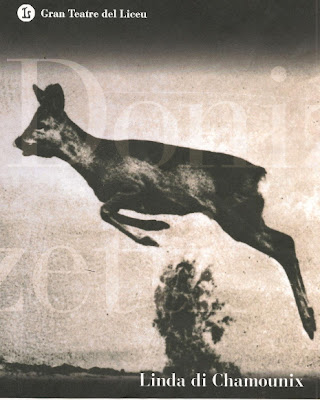 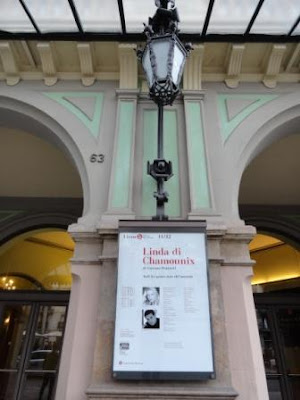 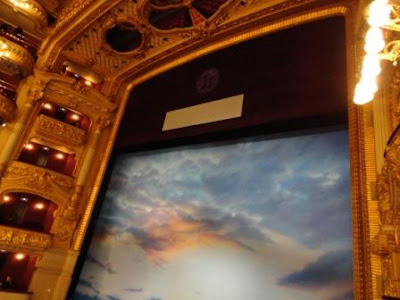 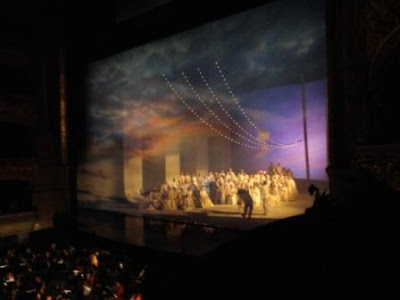 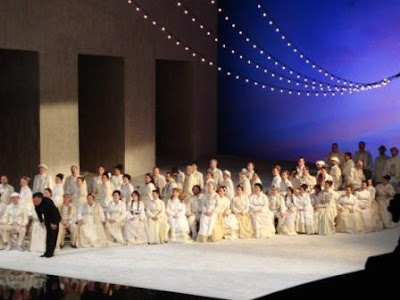 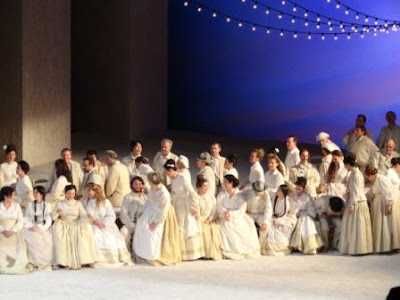 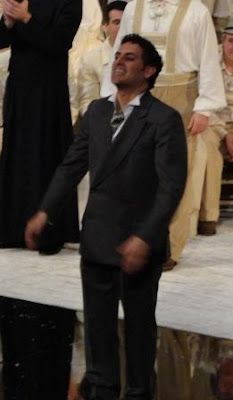 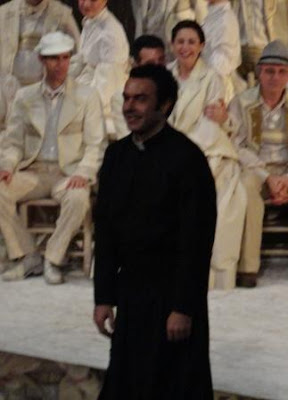 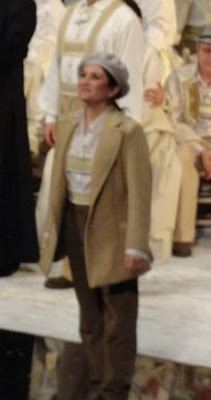 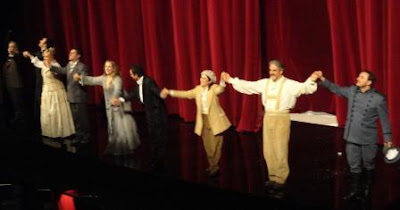 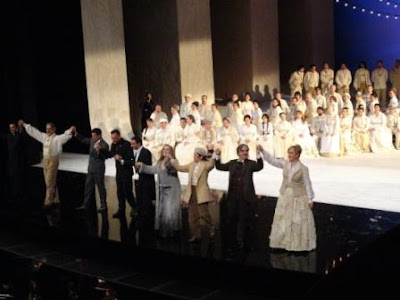 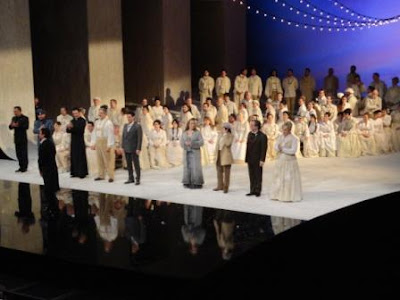 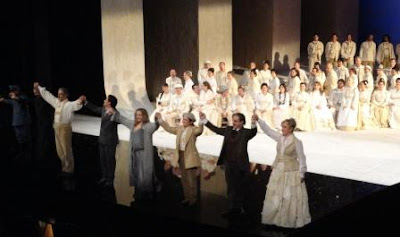 Linda di Chamounix is a late semiseria opera by Gaetano Donizetti, with libretto by Gaetano Rossi.

The opera tells the story of the romance of Linda, daughter of two modest peasants of Chamounix in the French Alps, Antonio and Maddalena, with Carlo (false identity of Viscount Sirval) who is the nephew of the Marquis de Boisfleury who also wishes Linda. Linda is sent to , accompanied by his friend Pierotto, to protect her from the marquis. In she is maintained by Carlo, who has revealed his identity. She has a rich but chaste life. When her father finds her, he accuses her of misconduct and she goes mad. On her return to Chamounix, after hearing the voice of Charles, she recovers and both lovers make pledges of eternal love. All ends well.

It is an opera of inferior quality when compared with many others of Donizetti and has a very dull 3rd act but, with a cast of exceptional quality, as in this case, it becomes a memorable performance .

The staging by Emilio Sagi is interesting and effective, though not bring anything new. The first act in is ​​set in a countryside setting where it snows but also where many flowers appear "planted" by the people (choir). The costumes are interesting. The Marquis arrives in na elegant antique car and everything happens in this scenario. In the second act () there is a leafy staircase in the middle of the stage which depicts the interior of the mansion where Linda is installed. The ground floor is sober and elegant, where the door to the street is. In the third act the scenario is similar to the first but instead of columns simulating tree trunks, there are various rectangular tables aligned at the middle of the stage, which will form the basis for movements of mad Linda during most of the act.

Marco Armiliato conducted in a somewhat irregular way the Orchestra of the Liceu. Sometimes it sounded too loud, overshadowing all the singers, sometimes at a slow pace and occasionally mismatched singers, including the Choir that also performed well.

What was truly amazing was the quality of singers offered by the Liceu:

Linda was interpreted by German soprano Diana Damrau. I do not have words to describe the stunning vocal and artistic quality of the singer. Although young, Damrau's voice has grown in recent years and reached a rarely heard splendor. She is truly fabulous in all registers, the coloratura is of a masterful quality, the potency great and the top notes ware stratospheric and always tuned. If in the aria O luce di quest’anima (1st act) she was excellent, in the mad scene (end of the 2nd act) where she used her vocal pyrotechnics as very few can achieve, she finished with a natural top E, as Alberto Velez Grilo from the blog Outras Escritas told me. The role of Linda is very long and vocally demanding. On stage Damrau is very credible and as I mentioned, in the mad scene at the end of the 2nd act, she was overwhelming. She had a long and sound ovation that was fully deserved. Sensational!

Juan Diego Flórez, Peruvian tenor, was Carlo. As I wrote in this blog several times, he is one of my favorite singers and, once again, he was at his best. Currently he has no rival in this repertoire. The voice is also more powerful but maintains the unsurpassed quality. The tone is unmistakable, the legato is smooth and fabulous, the coloratura is luxurious and top notes are unique in quality and extent. The role is not extensive but in the 2nd act aria Se tanto in ira agli uomini he showed all his qualities and also received a loud and lengthy ovation. His figure gives him credibility on stage, although he is not a gifted actor as he is a singer. Florez, despite his youth, has already reached a level of acceptance that wherever he sings, he is adored by the public, and that was the case in .

Marques de Boisfleury was the Italian bass-baritone Bruno de Simone. He sang well, the voice is respectable and, in what the character allows it, he was OK.

Spanish bass Simón Orfila was a stupendous Perfecte! It was by far the best interpretation that I hear from him. The voice revealed an extraordinary power, and in the low register he was superb. His good figure and agility on stage completed his terrific performance. Excellent!

Also fantastic was another Spanish singer, mezzo Silvia Tro Santafe who played Pierotti. Another powerful voice, in tune, of great beauty and with a low register of a quality rarely heard. On stage she was remarkable. The role is sufficiently long and diverse to allow the singer a brilliant and unforgettable performance.

Italian baritone Pietro Spagnoli was a “gray” Antonio. The voice was not fantastic, especially when compared with the others. he was often drowned out by the orchestra and he was unable to transmit emotion.

A final word about the public. I have already praised several times the demanding and the behaviour of the public of . This time I will not do so. Coughs in forte were continuous and deeply disturbing, and did not ease even after appeals from people from the public.

But worse was that by my side there was an unforgettable couple. The man (he was in the wings) got up and leave halfway through the first act to answer the mobile phone, and shortly after came back making a lot of noise as the soil is and wood. The woman spent all the performance hitting with the heel of the shoe on the floor at what was for her the rhythm of the music. Horrible!

But overall, despite the poor quality of the opera and the regrettable behaviour of the public, the exceptional soloists supplanted everything else.

If you attended an opera performance and would like to see your review posted in the blog “Fanáticos da Ópera / Opera Fanatics” you are welcome to send the text, if possible with photos, to one of the following e-mails: fanaticoum@gmail.com or camo.opera@gmail.com.

Non-original material is displayed in accordance with what is considered to be "fair use" and any copyright infringement is unintended. Nevertheless, if you feel that any contents displayed in the blog infringes your propriety rights, please contact us and we will remove those contents from the blog.